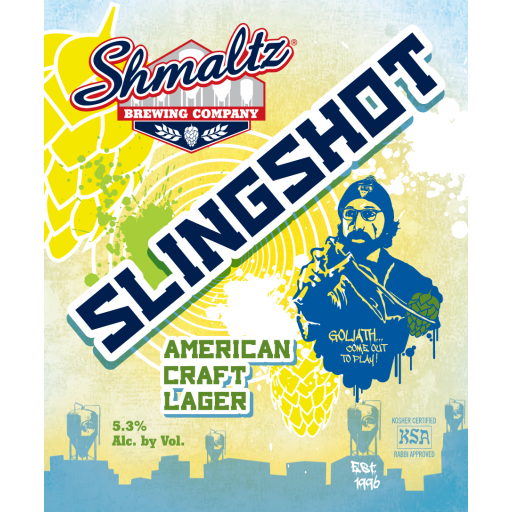 All images for educational use only. Do not reuse. All brewery and beer related names and logos are the property of their rightful owners.

As a young shepherd, David famously vanquished the giant Goliath with a hand-crafted sling. Our modern anti-hero Bart Simpson clowns through childhood with a slingshot. Homer, Caesar, and Thucydides wrote of the power of ancient slings. The IRA, the Incans vs the Conquistadores, and Native Americans have all wielded this iconic weapon of the underdog. Slingshots meant merry mischief to Dennis the Menace, Calvin, Woody Woodpecker and the Beverly Hillbillies. A musician and poet, the teenage David rose to the boasts of a mighty enemy, refusing the armor and weapons of the King, instead proclaiming victory, "Not by my sword nor by my might but by my Spirit." In Alchemy, the Star of David equals a mystical union of elements leading to nirvana. The 6-pointed Brewers Star blends fire, water, malt, yeast, hops, and the character of the brewer. In the spirit of so many Slingshots, Shmaltz hoists our fermented tribute to the glories of the underdog. Lap it up, Craft Tribe - and watch your back Big Beer. L'Chaim!