K is For Kriek 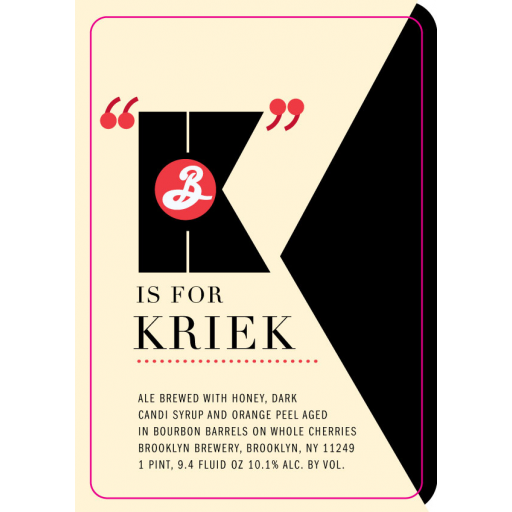 All images for educational use only. Do not reuse. All brewery and beer related names and logos are the property of their rightful owners.

“B” is for “Brooklyn.” We all learned that in school, yes? But “B” is also for “Belgium”. And when our brewmaster first visited Belgium in 1984, he learned that “K” is for “Kriek”. “Kriek” means “cherry” in Belgian Flanders, where for centuries Kriek beers have been made by adding cherries to lambics and other sour beers. Here in Brooklyn, we based our distinctly American take on Kriek on our dark abbey ale, the estimable Local 2. To this beer’s subtle marriage of malts, dark candi sugar, local wildflower honey and zing of orange peel, we added tart dried whole Montmorency cherries from Michigan. Around this, we wrapped a barrel of charred American bourbon oak. The sugar of the cherries began to ferment away. The barrels hissed. And we waited. Six months later, the beer emerged with a glowing red color, vibrant acidity, complex fruit aromatics, and a foundation of oak flavors, its strength moving past 10%. Its transformation almost complete, the beer joined priming sugar, Champagne yeast and wild Brettanomyces yeasts in the bottle and underwent a third fermentation. And we waited yet again. Now, a full year after we brewed it, this beer is ready for your table. K is for Kriek is dry, fruity, tart, full-bodied, and expansive, able to be enjoyed now or after years of cellaring. This beer is wondrous with poultry, duck and pork dishes, tremendous with goat cheeses, and a fine pairing for desserts. We originally made this beer just for ourselves, as part of our unreleased Ghost Bottle series, but it was too tasty to hoard. Beer is for drinking. And K is for Kriek.